From methane monitoring to predicting the behaviour of CO2 during geological storage, Total is at the forefront of finding solutions for creating a carbon-neutral world. Partnering with some of the world’s top research institutions and corporations, including the Massachusetts Institute of Technology (MIT), Google, Stanford University and Lawrence Livermore National Laboratory, Total’s researchers and engineers are using artificial intelligence (AI) and high-performance computing (HPC) technologies to fight climate change and achieve carbon-neutrality by 2050, in accordance with the Paris Climate Agreement.

Total’s ambitious computational science engineering programme pairs a commitment to achieving carbon-neutrality with investment in the best innovative technologies to help us get there faster.

Led by Philippe Cordier, Total’s research programme director for scientific computing data science and AI, the “DEMETER” and “FC-Maelstrom” projects are the latest examples of how the group is using a combination of data science, AI, satellite imagery or numerical simulation to ensure a greener future for our planet. “The goal of these aspirational projects is to combine different backgrounds and skills in geoscience, imagery… to tackle complex issues requiring new and integrated approaches,” says Cordier.

The key to understanding and predicting the behaviour of climate change? In a nutshell, data, data … and more data. Every day, hundreds of satellites scan the planet, collecting data that measures changes within our climate system — everything from greenhouse gas concentrations to sea level elevation. On an average day, these satellites collect petabytes — that is, a million billion bytes — of data about our planet. Using AI techniques, Total’s “DEMETER” project works to quickly analyze this immense amount of information. The project has three main objectives, starting with quantifying renewable electricity potential of different sites across the world, through Solar Mapper and Wind Mapper projects. Total is also using satellite imagery to measure methane emissions of its industrial sites. Finally, the group aims at measuring the amount of carbon reserves stored around the world, which is growing thanks to Total’s increased investment in nature-based solutions.

Total’s innovative Solar Mapper project, in partnership with Google Cloud, demonstrates the Group’s investment in renewables and strong focus on solar energy. Launched in 2020, Solar Mapper uses airborne imagery, AI techniques and algorithms to help Total estimate the solar potential of a particular geographic site within just a few seconds. “We want to be able to map solar energy’s potential at a global level,” says Gilles Poulain, project manager for Solar Mapper. “In seconds, we can know what kind of energy to produce and how much return we will get on our investment in most countries where we operate.”

That’s particularly impressive when you think about all the information needed to gauge a site’s potential: everything from detailed weather history to the amount of shade it receives every day. Historically, gathering this kind of data can take and requires sending large teams on-site to physically track these patterns in real-time. Solar Mapper also helps Total evaluate the amount of carbon the group has sequestered thanks to large investments in forests.

Around 20% of the world’s greenhouse gas emissions come from methane [1]. In fact, the concentration of methane in the Earth’s atmosphere has been rapidly increasing since the start of the industrial era. Total is working to limit its contributions to these emissions by tracking the amount of methane emitted by the Group. By doing this, Total can quickly detect and repair things such as leaks and other kinds of inconsistencies that may be contributing to methane emissions. 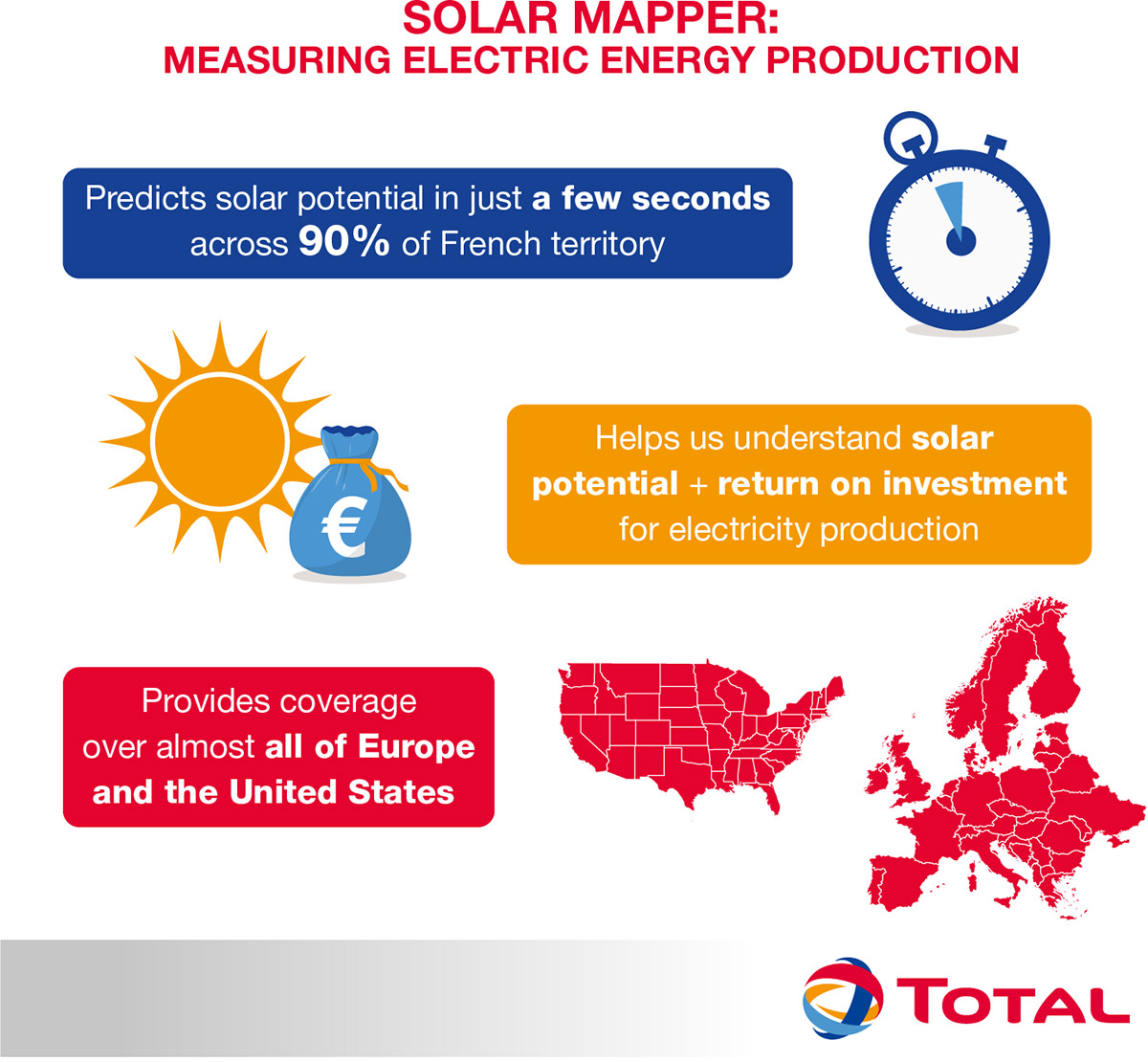 FC-Maelstrom: Using HPC technology to predict the behaviour of CO2 during geological storage

The main driving factor of climate change is the release of carbon dioxide (CO2) emissions into the Earth’s atmosphere. One technology used to permanently remove CO2 from the atmosphere is Carbon Capture and Storage (CCS), which consists in storing CO2 in geological formations. By capturing CO2 emissions at the industrial source and storing them deep underground, they become sealed off from the atmosphere and returned to the subsoil.

The FC-Maelstrom project leverages the latest HPC technologies to better predict big capacity storage sites in order to maximize the volumes that can be safely stored per site.

Launched in 2018, the five-year, 20 million euro research project is taking place with two partner institutes in California – Lawrence Livermore National Lab (LLNL) and Stanford University. Together, Total and its partners are developing a simulator that can predict the behaviour of CO2 during this geological storage with amazing precision.

By being able to predict such conditions of geological storage, Total can help ensure its storing CO2 in exclusively safe and secure environments. Two years into the project, Total is already able to run simulations on real-life dataset from the Gulf of Mexico.

Total also believes in sharing its work for the greater good of our planet. That’s why the Group has decided to open-source the calculation code developed during this partnership with the greater community. Total hopes this tool will be useful for others working with geological storage of CO2, therefore contributing to carbon-neutrality on a global scale.

Further innovation thanks to an investment in quantum computing

Since 2018, Total has been investing in quantum computing with a focus on CO2 capture. In partnership with Cambridge Quantum Computing (CQC), their researchers are using quantum computing to study a process called adsorption, one of the most effective ways of removing CO2 from the flue gases which exit into the Earth’s atmosphere.

Total quantum computing project has received, through the NEASQC consortium, a highly prestigious EU grant to work with Paris Sorbonne University and the Irish Centre for High-End Computing (ICHEC) to complement collaboration with CQC. The award is part of the Horizon 2020 programme, which will allow Total to study new ways to reduce quantum computing power needed to run the kinds of algorithms associated with this kind of research.