Diversity is the name of the game for Total. The French multinational is looking firmly to the future and further developing sources of renewable energy, particularly to feed the hunger for what the company describes as the “energy of the 21st century” — electricity.

“Total has been in the energy sector for decades, demand for electricity is only going to increase and we know we want to be a part of that market. Diversifying is what will keep us strong,” explains Thomas Rebeyrol, Senior Vice President Strategy, Growth & People, Total Gas Renewables & Power.

Rebeyrol has been with the company for more than two decades and knows Total’s strategy inside-out, “10 years ago renewables were a new world for us, but we want to be as successful as we’ve been with oil. It’s a change of gear, but we’ve done pretty well, considering electricity provision was a state monopoly in much of Europe until relatively recently.”

The company works in the B2B gas and power sector in the U.K., France, Belgium, the Netherlands, Germany and Spain, as well as B2C in France and Belgium, investing between $1.5 billion and $2 billion annually in low-carbon electricity production.

The bulk of those investments are in solar and wind technologies. “We offer a wide range of renewable deals in different countries. Our European strategy is very similar to what we do with our traditional oil business, we are producers, providers and suppliers to the end-user,” explains Rebeyrol.

After entering the B2C market as an electricity and gas supplier with the acquisition of the Belgian company Lampiris in 2016, Total went on to acquire France’s Direct Energie in 2018. The diversification brought its own challenges, such as how to provide well-priced clean energy solutions, not just to big industry, but directly to customers.

With the Direct Energie buyout, Total boosted its customer base in gas and power from 1.5 million to 4 million overnight. A figure that is climbing, thanks to a focused 10-15 year strategy, according to Rebeyrol, “We’re looking to add half a million customers a year in France and Belgium.”

Total’s first foray into sustainable energy production was back in 2011, when it acquired U.S.-based solar panel-maker SunPower. With this expertise in its portfolio, Total can sell hardware and help build solar energy projects for large companies who want to produce their own green energy, on their own sites.

Solar energy is getting cheaper, but is still intermittent. “What’s challenging is obviously the harnessing of the energy long after sundown, particularly in a European winter,” says Rebeyrol.

Total’s VP International Power & Gas Marketing, Tom Van de Cruys agrees, but believes Total is ahead of the curve in Europe, “Battery storage options are what I would describe as “just behind the door,” profits on this sort of venture were once out-of-reach but we’ll very soon be breaking even.”

With the knowledge that storage of renewable energy is as vital as production, Total has invested heavily in Saft, making it one of the world’s leading battery manufacturers. New generation lithium-ion batteries are making storage solutions ever-cheaper and performant so energy can easily be delivered to consumers when it is most needed.

Total currently rises to the challenge of intermittent energy for all renewables consumers by filling the gaps with gas. Customers increasingly want greener options and to reduce their CO2 emissions. Gas can keep emissions of CO2 down by up to 50%, when compared with burning coal to produce electricity.

Flexibility in energy supply and consumption is key; the way clients use energy is changing and that is what Total is working on, “We need to look closely at the consumer, harness the digital technology and if necessary make changes in the way we offer them energy solutions,” Van de Cruys explains, “Soon it’ll be an algorithm that decides when to charge your electric car, it’ll be when energy is cheapest and cleanest, not necessarily the moment you plug the car in.”

In Belgium renewable energy is a two-way venture for Total, they buy direct from more than 1,200 local suppliers and sell straight on to individuals. Flexibility in production comes through a pumped storage hydro plant. “In other countries, our B2C operation combines renewables with gas to offer the consumer a wrap-around solution,” says Van de Cruys. He knows the landscape well, having been CEO of Lampiris when it was bought by Total.

Total’s B2C clients now expect help with installing solar panels and EV charging points at home, as well as payment plans to offset the cost and some even have their own batteries for storage. Does this diversification cause something of a headache for Total? “It’s not exactly straightforward,” admits Van de Cruys, “But it makes for a much stronger customer relationship, a real bond, we believe will pay dividends in the long run. Technology is moving forward at such a rate and that really helps us interact.”

Opening to new B2C markets is very much on the table. Currently a major supplier of gas and power in several European B2B markets, Total is eyeing direct-to-consumer ventures in the longer term. 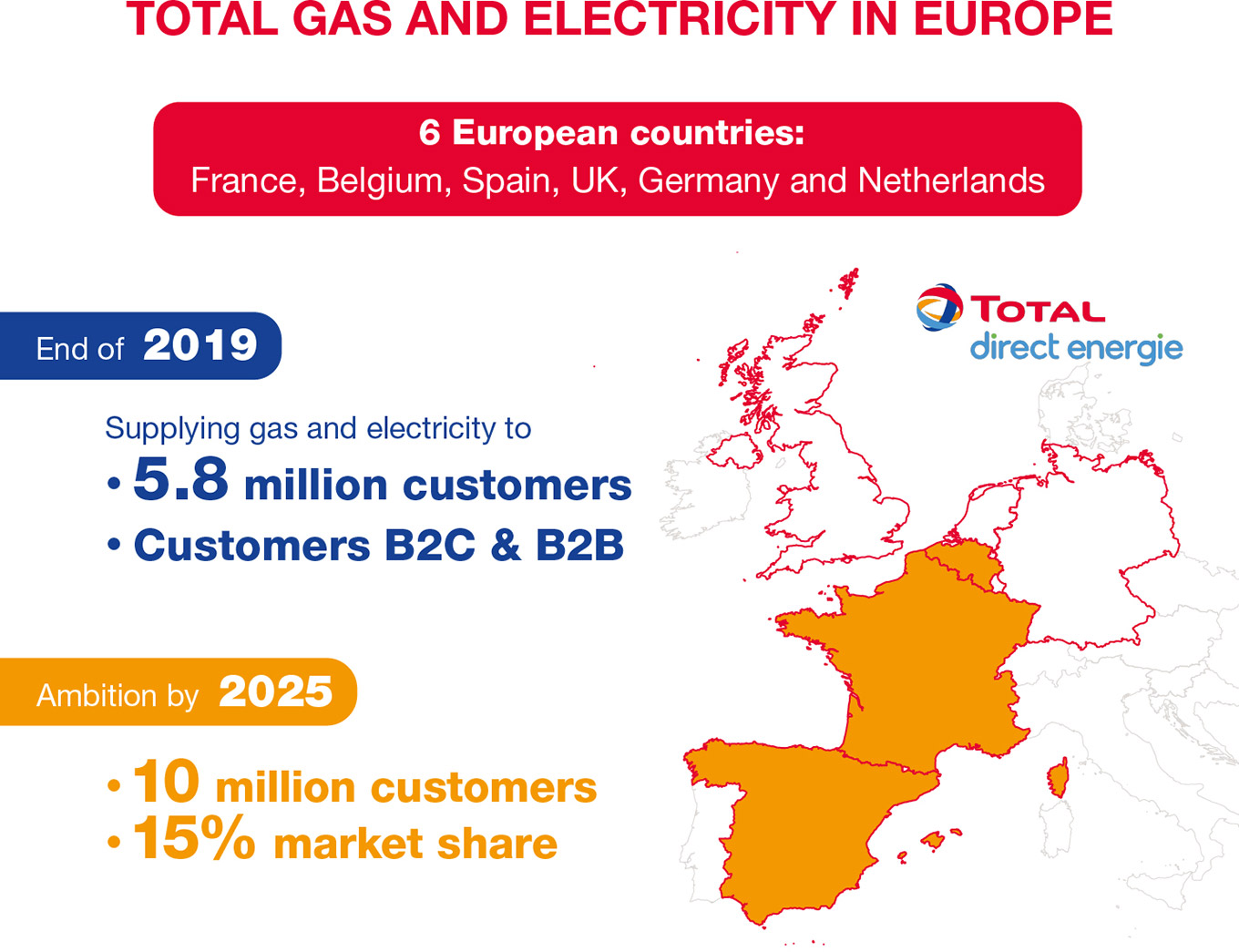 Both Reyberol and Van de Cruys are clear, there are no limits to what they would like to achieve in the renewable energy sector.

Total signed a deal with Qatar at the beginning of 2020, representing its biggest solar project to date, with 2 million bifacial solar panels across 1,000 hectares. By 2022 that project will provide about 10% of peak electricity demand.

As for Europe, the group’s ambition to expand electricity supply to 10 million sites by 2025 is already well on track. Acquiring Energías de Portugal’s portfolio of 2.5 million B2C customers in May allowed Total to enter the Spanish market and become the fourth-largest supplier of gas and power in the country.

In the U.K., the world’s largest offshore wind market, a partnership with Simply Blue Energy sees the company become a stakeholder in a pioneering floating wind project off the coast of Wales.

Total is exploring all possible avenues, whether B2B or B2C, to make sure future energy provisions are affordable, reliable and renewable.